I saw a report on this new Pepsi advert, the one where a model, who I’ve never heard of, is distracted during a shoot, by a large group of protesters. The report suggested people were upset with the model’s participation in this disgusting commercial, but what should be bothering people is – how the fuck did this advert ever get made!

What were the creators of this exploitative crap thinking? Why did they think it was an acceptable idea? It’s just another example of the insidious nature of modern Capitalism, and the way it’s become acceptable to exploit every aspect of our lives, as long as there’s profit to be made. 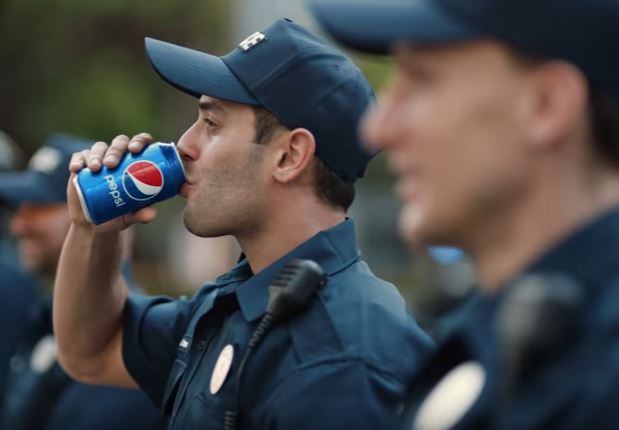 Thousands of people have been killed or imprisoned, tortured and ‘disappeared’, in the act of protest. People march to protest against poverty, racism, inequality, war, and in support of improving women’s rights, disability rights, worker’s rights … Serious, important political issues.

Then some shitty little morons at Pepsi come along and try to profiteer.

It’s as if Pepsi –  with the anti-Trump protests, ‘Black Lives Matter’ protests and others – thought ‘protesting is cool and trendy’?

This is trite bollocks Pepsi write under their shite YouTube version of the advert:

A short film about the moments when we decide to let go, choose to act, follow our passion and nothing holds us back. Capturing the spirit and actions of those people that jump in to every moment and featuring multiple lives, stories and emotional connections that show passion, joy, unbound and uninhibited moments. No matter the occasion, big or small, these are the moments that make us feel alive.

Have you ever read such utter garbage? Notice all the emotive crap – ‘joy’, ‘passion’, ‘spirit’, ‘uninhibited’ – what have they to do with some hideous, sugar-laden, unhealthy soft drink? (NOTE: nearly every ad you see now uses this ’emotive’ technique)

All the protesters are happy because someone  gave a policeman a can of Pepsi?

Of course Pepsi aren’t alone. The Capitalist marketing cretins are everywhere. Go to any music festival, everything is sponsored by some irrelevant corporation. Attend any sporting event and you’ll be bombarded with all kinds of marketing nonsense.

We can’t be allowed to just go and enjoy the things we love, or participate in the things we feel are important. Not when they can be hijacked and diminished, and there’s a profit to be made?